Home > Blog Details > A Journey Begins - How We Started Our Work 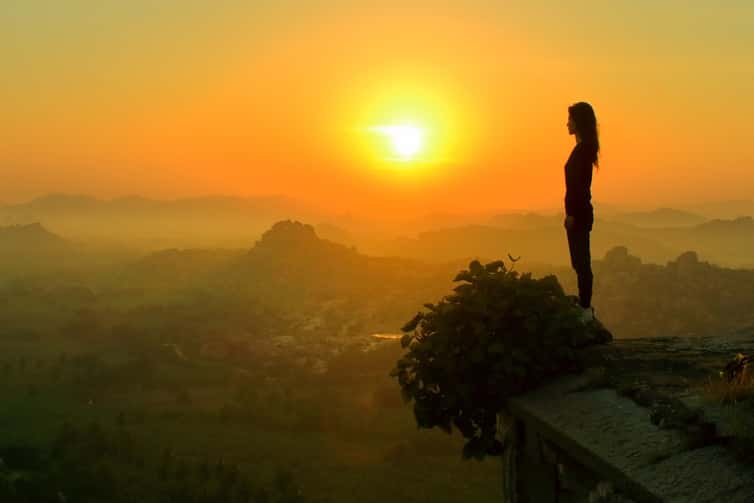 A Journey Begins - How We Started Our Work

A few years ago, the seed of an idea took root in my mind and grew until I could ignore it no longer. Many months before this date, I decided to give in to this idea and work towards realizing the vision that had slowly begun to drive me. So I took a bus one night and woke up on a road that I hoped would lead me to my vision. This particular road ended in Anegundi, a historical village in the protected zone of a World Heritage Site called Hampi, where many who travel in India like to visit. My father’s words rattled through my mind as the bus wound its way through rural Karnataka State. Even the bus conductor, from his curious glance, seemed to be echoing them: "why are you going there?"

The conductor addressed me in English. I responded to him in my mother tongue, Kannada.

“Oh you know Kannada? Which country?”

That earned me a stare and several sidelong glances. Kampli is a town in the area, with supposed historical connections to the Vijayanagara Empire whose ruins today make up the monuments at Hampi. That’s where my family comes from.

A complicated question. We stopped, finally, in Hospet, the closest town you will find on your travel to Hampi. I waved my bus ticket at the conductor and told him it was booked all the way to the actual village of Hampi that gave its name to the World Heritage Site.

He refused to take me there.

“See Madam, you’re the only one going to Hampi. If there were more of you, I would have dropped you there, but it doesn’t work out for me to take you there.”

“Excuse me? I want to get to Hampi. I have a ticket which says as much. Make it happen.”

“No. I can’t. It doesn’t work out. I will drop you to the office; you deal with the office people.”

The ‘office’ was a hole in the wall with no one inside it. I was properly upset by now. So I parked myself behind the Manager’s desk, fished out my laptop and began to get some writing done. One thing I know from travelling in India is that you have to make the best of what you’re handed. What I was handed was a serious bump on the road to my destination:the village of Anegundi, where I had booked  my homestay accommodations for stay in Hampi. I decided to find a solution. I wasn’t going to move an inch until they sorted out my problem. I must have created quite a spectacle because my determined ‘parking’ behind the Manager’s desk garnered some curiosity. Someone gave me a number to call. The guy I called sounded like he’d just gotten out of bed; not surprising, since it was early morning. I got back to work, making sure to call him every few minutes to remind him I was still waiting.

He arrived at last, and gave me the same explanation about how to it didn’t ‘work out’ to drop just one person all the way from Hospet to Hampi. We went back and forth for a good half an hour. I remember waving my arms a lot and huffing and puffing quite a bit. He finally agreed to pay a part of my fare so I could reach the river-crossing point and get to my destination. I compromised at this point and hopped onto an auto-rickshaw: auto rickshaws or ‘tuktuks’ are the best way to get from Hopset to Hampi. At the time, I didn’t know that buses from Hospet to Hampi and Hampi to Hospet ran regularly.

The auto-driver, who was silent witness to this entire show, proceeded to explain me the difficult mathematics behind this little event. The particular bus company with which I had so unwisely chosen to make my bookings said they took you all the way to Hampi but they really didn’t if it was just one person. Why waste all that petrol for only one human being?

Truth be told, I didn’t get it at the time. Since then, I've learnt that there are a million, tiny little ways that rural India works to economize, to save a little here and there and not to waste. The mentality of not wasting and reducing costs is so ingrained into people that I have learned, over time, to live a more sustainable life. To my city mind, it appeared that when a customer has paid for a service, any serious business should deliver what they promised. I pretended to agree with the driver for the sake of compromise. My agreement to his logic made him generous. He said he would drop me wherever I wanted to go.

“No extra cost for you, Madam!”

Another timeless lesson I learnt when traveling in India, particularly, rural Indian tours: people are happy to compromise for you if they realize that you are happy to compromise for them. It is still one of the best tips for traveling in India that I can give: compromise. I decided to go to Talarighat Gate, the only river crossing point that would lead me directly to the village of Anegundi, where I had booked a homestay for the next few days at the World Heritage Site.

‘When you travel to India, the city is what you expect, but Hampi is what you hope for’ ~ Melissa, traveler

We wound our way through more paddy fields and banana plantations. Hampi for the first time can be quite striking to the eye. Among hard granite rocks, chiseled into the most peculiar shapes by nature and time, are the more studied and intricate carvings of the fourteenth century Vijanayagara Empire. Some of them are temples, still visited by pilgrims each year, as they have been through the centuries; some others are the living quarters of ancient monarchs, an echo set in stone of a time gone by. They stand proof of man’s ability to mould any land to the musings of his imagination.

Against the backdrop of these inanimate epithets of man and nature are the living and vibrant cultivated fields of Hampi’s people. They meander side by side with the Thungabhadra river. I was struck, as I am always when in rural India, by the contrast of these sleepy little villages to the mad rush of the country’s cities. The landscape was all sprawling open spaces and blue skies. It was a paradox, if you will. The houses and huts were decidedly new; the attitude of the people almost certainly in accordance with ancient custom.

I crossed the river on a rusty, old boat. The boat-wala also took motorbikes on board and I had to squash up with other passengers to make space for 7 of them. It was a relief when I arrived, at long last, at my homestay in Hampi. I laid down my bag in a quaint little room with a view of a courtyard, surrounded by flowersbut, was surely one of the best accomodations for stay in Hampi. I was  exhausted but excited. As I sat down on the bed, I was reminded of my father’s words: “It’s like you’re going into the unknown. Why are you going there?”

Why, indeed, was I in that little room, so far removed from everything I had ever known?

The story of Vijayanagara began in the village of Anegundi and here too, my journey begins. I think this is a good place to bring a full stop to my first post: at the end of one journey, and the start of another.